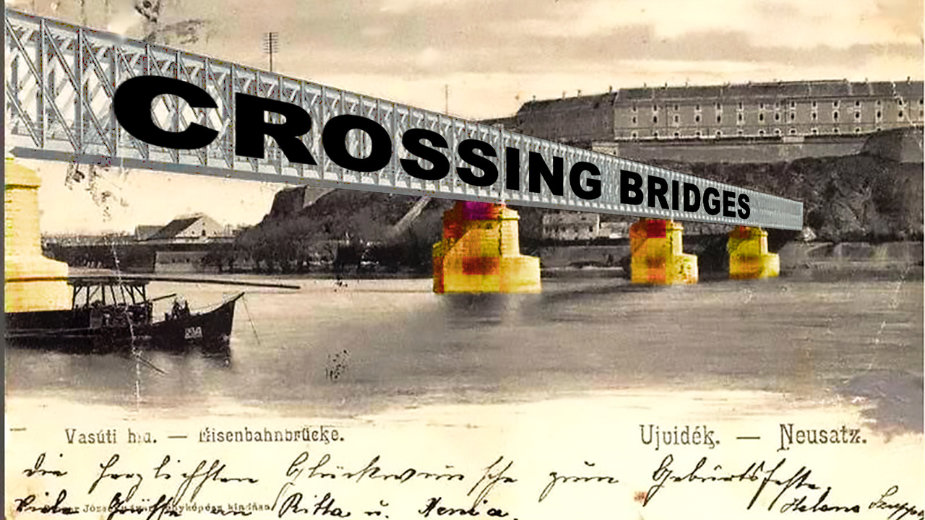 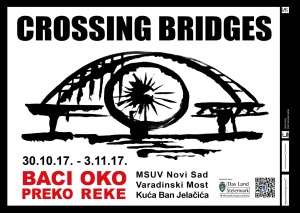 Film Auditorium of the Museum of Contemporary Art of Vojvodina/(MSUV),Dunavska 37
*  19:00  A Future without borders – Visions of an utopia. –  interdisciplinary discussion.

*  19:00  A Future without borders – Visions of an utopia. –  interdisciplinary discussion.

Danube Key by the bridge, Petrovaradin

* 16:00-18:00 Tour with talk with MSUV Novi Sad around the Varadinska Bridge to Petrovaradin: Opening of the Artistic Intervention /  gesture in public space.   Kuća Ban Jelačića

The project CROSSING BRIDGES, initiated by Igor Petković, took place for five days in the Serbian town of Novi Sad. In addition to podium discussions, film screenings, art workshops and lectures, a successful art intervention was presented in public space. The project “Baci oko preko reke” (in English somethink like: “take a look over the river”) was realized on both sides of the Danube, two huge murals, one on each of the quay walls around the Vardinska Bridge (whose predecessor bridge was destroyed by the NATO in 1999). A female and a male pair of eyes that twinkle at each other across the river. It was nice to see how passers-by stopped over and commented positively on the artwork and the background of the project. The location and the symbolism of this temporary art event, which was also highly featured by the regional and national Serbian media, could not have been better selected. For just in this place, in the shadow of the former Austro-Hungarian fortress Petrovaradin and the quay “Žtrava Racije”, the river was in the past centuries again and again the scene of warlike fighting, demarcations, massacres and destructions. Here, the Christian-defining West consolidated its defensive walls against a spreading power from the Muslim Orient. Here, a memorial commemorates the fact that in only three January days in 1942, over 800 Jewish and Serbian women, men and children of the city were killed by Hungarian forces and the corpses were thrown into the river, this same water body that separates Novi Sad from Petrovaradin. An important motivation to reificate the common ground above the dividing line! For Igor Petković, this art event is therefore only a first step. Already in the spring of 2018, if there is a permission, an art installation on the remaining bridge pillars of the former ku.k. railway bridge will follow. In 2021, Novi Sad will be the European Capital of Culture under the slogan “For new bridges”. With the transcultural art project “Crossing Bridges” within the framework of our project “Inverting Battlefields – for a borderless future”, we can already and hopefully continue to act in this spirit in the coming years.